This is Edward Penny’s 1764 painting, The Marquis of Granby giving Alms to a sick Soldier and his Family.  It’s not the typical image we might have of war. 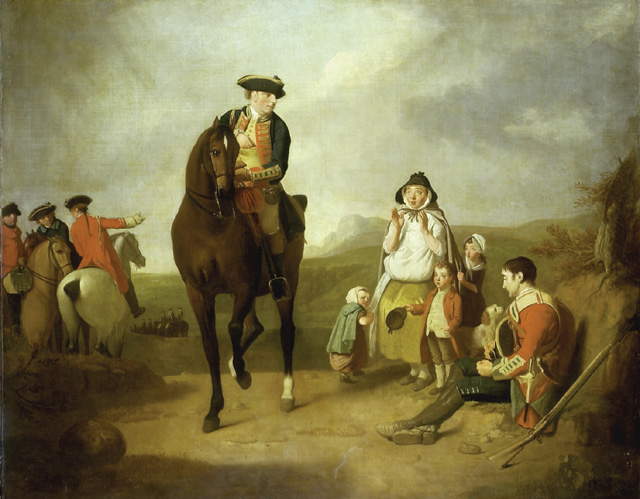 Yet this was one of the most popular portrayals of eighteenth-century war in Britain.

Engravings – cheap print versions – of this painting were immensely popular throughout the 1760s, in part because they celebrated one of Britain’s military heroes after British success in the Seven Years War (1756-63).

One of my favourite responses to this painting was from a student who remarked that Granby didn’t seem very nice – perhaps even a bit of a jerk – as he didn’t even bother to dismount his horse when speaking to the soldier.  It’s a useful reminder that paintings aren’t easy to ‘read’.  They make use of conventions of the time.  We might find Granby on his horse disrespectful; to people at the time it demonstrated his social status and his humility in even taking notice of the poor sick soldier.

This image of Granby, like other war paintings and monuments, celebrates him as a hero not for his action in combat but because of his humane leadership.  This captured how his loyal soldiers saw him and why he was so popular among the British public: for his generosity and genuine care for the men under his command.  This, the story goes, is why so many pubs in England are still named after him.  When war ended, Granby gave gifts to disabled non-commissioned officers, which enabled them to set up their own pubs and so earn a livelihood.

I’m very fond of this painting – even though it’s not immediately striking, and it doesn’t capture the flash and adrenaline of battle that we usually associate with images of war.  But I think it captures a crucial part of military strategy.  And this part remains important today: the need to capture soldiers’ loyalty through concern for their welfare.  We all know that poor treatment of veterans or disabled soldiers is the fastest way to discredit a leader.  The same was true in the eighteenth century.  Frequent newspapers brought war reports into people’s every day lives; images of war were bought by people through engravings and even as everyday objects (see this amazing mug of Admiral Rodney’s head).  Especially because British people paid taxes that helped support the war effort, public support was crucial to the war effort.  And so, this painting reminds us that people in the past were also adept manipulators of public opinion, especially when it came to war.

2 thoughts on “Images of War”

me and my research